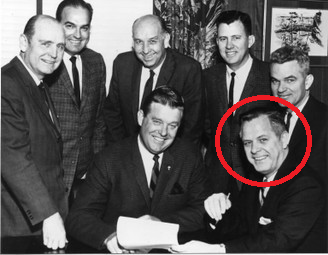 Wallace and Baker were so close, that on his very first day as governor in 1963, Wallace borrowed a necktie from Baker after the Governor failed to pack any ties in his move to the Governor’s mansion.

According to a news report from 1991, Harry Brock, the long-time CEO and Chairman of Central Bank, stated, “There wouldn’t have been a Central Bank without Schuyler Baker. He was a lawyer with good connections with Gov. (George) Wallace, and he had a promise for a bank charter…”

A promise from one segregationist to another: a bank charter.

As an attorney, BBVA’s founding father also fought racial integration on behalf of Wallace. Baker challenged the Kennedy Administration in court in an attempt to block African-Americans from attending the University of Alabama.

Wallace and BBVA’s founder lost, but Wallace stood in the schoolhouse door on June 11, 1963 in a symbolic demonstration against African-Americans and the Civil Rights Movement.